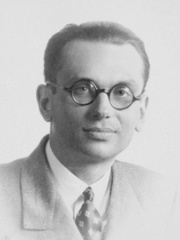 Kurt Friedrich Gödel (; German: [ˈkʊɐ̯t ˈɡøːdl̩] (listen); April 28, 1906 – January 14, 1978) was a logician, mathematician, and analytic philosopher. Considered along with Aristotle and Gottlob Frege to be one of the most significant logicians in history, Gödel had an immense effect upon scientific and philosophical thinking in the 20th century, a time when others such as Bertrand Russell, Alfred North Whitehead, and David Hilbert were analyzing the use of logic and set theory to understand the foundations of mathematics pioneered by Georg Cantor. Gödel published his two incompleteness theorems in 1931 when he was 25 years old, one year after finishing his doctorate at the University of Vienna. Read more on Wikipedia

Since 2007, the English Wikipedia page of Kurt Gödel has received more than 2,460,456 page views. His biography is available in 87 different languages on Wikipedia making him the 32nd most popular mathematician.

Among MATHEMATICIANS In Austria