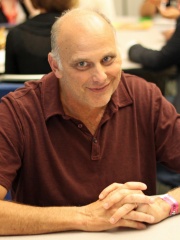 Kurt Fuller (born September 16, 1953) is an American character actor. He has appeared in a number of television, film, and stage projects. He graduated from Lincoln High School in Stockton, California in 1971, and the University of California, Berkeley, in 1976. Read more on Wikipedia

Since 2007, the English Wikipedia page of Kurt Fuller has received more than 791,546 page views. His biography is available in 18 different languages on Wikipedia making him the 3,549th most popular actor.

Among actors, Kurt Fuller ranks 3,504 out of 8,832. Before him are John Spencer, Gregory Hines, Margo Martindale, Rinko Kikuchi, Henry B. Walthall, and Madeline Kahn. After him are Brett Cullen, Jessica Walter, Jaimie Alexander, Chris Farley, Gilbert Roland, and Béatrice Dalle.