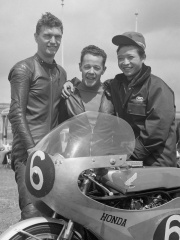 Kunimitsu Takahashi (Shinjitai: 高橋 国光, Takahashi Kunimitsu, born January 29, 1940 in Tokyo) is a Japanese former professional motorcycle road racer, racing driver, and current owner and team manager of Team Kunimitsu in Super GT. Nicknamed "Kuni-san", he is known as the "father of drifting". His racing career lasted from 1958 to 1999. He competed on motorcycles between 1958 and 1963, during which he became the first Japanese rider to win a World Grand Prix, taking four world-level wins in total. Injuries sustained in a crash in 1962 led to him switching to four-wheels in 1965, after which he has won the 24 Hours of Le Mans in class, become a four-time All-Japan Sports Prototype Champion, and won in Japanese Top Formula, JTC and JGTC. Read more on Wikipedia

Among RACING DRIVERS In Japan