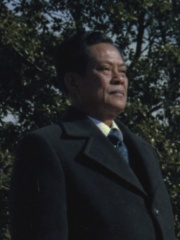 Kriangsak Chamanan (Thai: เกรียงศักดิ์ ชมะนันทน์, pronounced [kria̯ŋ.sàk tɕʰā.má(ʔ).nān]; 17 December 1917 – 23 December 2003) served as prime minister of Thailand from 1977 to 1980. After staging a successful coup, he was asked to become Prime Minister in 1977, he ruled till 1980 and is credited with "steering Thailand to democracy" in a time where internally, communist insurgents are rampant and neighbouring countries have turned to communist rule following the communist takeover of Vietnam: South Vietnam (by the Viet Cong), Laos (by the Pathet Lao), and Cambodia (by the Khmer Rouge). Read more on Wikipedia

Since 2007, the English Wikipedia page of Kriangsak Chamanan has received more than 35,738 page views. His biography is available in 17 different languages on Wikipedia making him the 11,327th most popular politician.