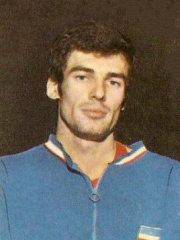 Krešimir "Krešo" Ćosić (Croatian pronunciation: [krěʃimir t͡ɕɔ̌ːsit͡ɕ]; 26 November 1948 – 25 May 1995) was a Croatian professional basketball player and coach. He was a collegiate All-American at Brigham Young University, lead the Yugolav national team to countless victories and revolutionized the game of basketball in Croatia, former Yugoslavia, Europe and BYU. Ćosić is referred to as the man ahead of his time because he was the first-ever basketball player in the world to play all five positions, he combined US and European basketball styles and was a game innovator. He is known for turning down NBA offers from the LA Lakers and Portland Trailblazers 15 years before other Europeans made their way to the NBA. In 1996, Ćosić became only the second international player ever elected to the Naismith Memorial Basketball Hall of Fame. Read more on Wikipedia

Since 2007, the English Wikipedia page of Krešimir Ćosić has received more than 187,709 page views. His biography is available in 24 different languages on Wikipedia making him the 13th most popular basketball player.

Among BASKETBALL PLAYERS In Croatia