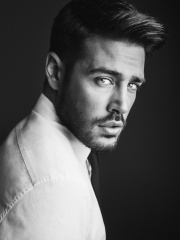 Kostas Martakis (Greek: Κώστας Μαρτάκης; born 25 May 1984) is a Greek singer, model, television host and actor, who rose to fame after appearing on Greek talent show Dream Show aired by Alpha TV in 2006. Following his participation, he released five studio albums and also participated in the Greek national final for the Eurovision Song Contest 2008 and 2014. In 2011, he participated in the second season of Greece's Dancing with the Stars, placing second and three years later he was in the backstage host featuring Doukissa Nomikou. Read more on Wikipedia

Among singers, Kostas Martakis ranks 2,408 out of 3,541. Before him are Lia, Kristian Kostov, Cleo, Andra Day, NK, and Giusy Ferreri. After him are Rossa, MC Eiht, Joel Madden, Madison Beer, Maria Rita, and Kati Wolf.