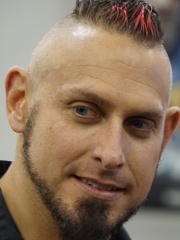 Ryan Parmeter (born February 6, 1980) is an American professional wrestler, who wrestles under the ring name Big Kon. He is best known for his time with WWE under the ring name Konnor.After spending four years wrestling on the independent circuit as Ryan O'Reilly, Parmeter signed a contract with WWE in 2005, and was sent to its developmental territory Deep South Wrestling (DSW), where he wrestled as Roughhouse O'Reilly. He won the DSW Heavyweight Championship twice, before briefly appearing in Florida Championship Wrestling (FCW). Read more on Wikipedia

Since 2007, the English Wikipedia page of Konnor has received more than 5,695 page views. His biography is available in 15 different languages on Wikipedia making him the 528th most popular wrestler.

Page views of Konnors by language