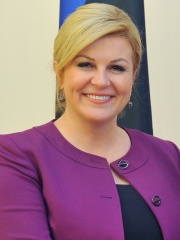 Kolinda Grabar-Kitarović (pronounced [ɡrǎbar kitǎːroʋitɕ] (listen); born 29 April 1968) is a Croatian politician and diplomat who served as President of Croatia from 2015 to 2020. She was the first woman to be elected to the office since the first multi-party elections in 1990 and independence from Yugoslavia in 1991. At 46 years of age, she also became the youngest person to assume the presidency.Before her election as President of Croatia, Grabar-Kitarović held a number of governmental and diplomatic posts. Read more on Wikipedia

Kolinda Grabar-Kitarović is a Croatian politician and diplomat. She is the 12th and current President of Croatia.

Among politicians, Kolinda Grabar-Kitarović ranks 2,677 out of 15,710. Before her are Anders Fogh Rasmussen, Heonjong of Joseon, Georg Michaelis, Alfonso III of Asturias, Princess Irene of Greece and Denmark, and Wied, Prince of Albania. After her are Alexios I of Trebizond, Violant of Hungary, Armand-Emmanuel de Vignerot du Plessis, Duc de Richelieu, Valdas Adamkus, Francis III, Duke of Brittany, and José Manuel Barroso.