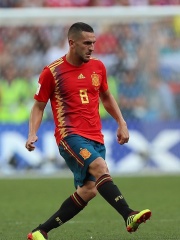 Jorge Resurrección Merodio (Spanish pronunciation: [ˈxorxe resurekˈθjon meˈɾoðjo]; born 8 January 1992), known as Koke ([ˈkoke]), is a Spanish professional footballer who plays for and captains Atlético Madrid as a midfielder. He has spent the entirety of his career with Atlético Madrid since making his debut with the first team in 2009, playing over 450 competitive matches and winning the 2013–14 La Liga, two Europa League titles and two UEFA Super Cup trophies, while he was also a Champions League runner-up in 2014 and 2016. Koke won the 2013 European Championship with the Spanish under-21 team. Read more on Wikipedia

Page views of Kokes by language