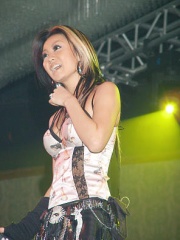 Kumiko Kōda (神田 來未子, Kōda Kumiko, born November 13, 1982), known professionally as Koda Kumi (倖田 來未, Kōda Kumi), is a Japanese singer from Kyoto, known for her urban and R&B songs. After debuting with the single "Take Back" in December 2000, Koda gained fame in March 2003 when the songs from her seventh single, "Real Emotion/1000 no Kotoba", were used as themes for the video game Final Fantasy X-2. Her popularity grew with the release of her fourth studio album Secret (2005), her sixteenth single "Butterfly" (2005), and her first greatest hits album Best: First Things (2005), reaching the number-three, number-two, and number-one spots respectively.Though her early releases presented a conservative, quiet image, she has become a fashion leader among young women, setting trends such as the ero-kakkoii style. Read more on Wikipedia