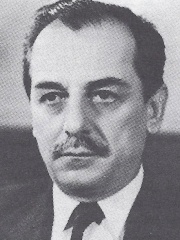 Konstantin "Koča" Popović (Serbian Cyrillic: Константин Коча Поповић; 14 March 1908 – 20 October 1992) was a Yugoslav politician and communist volunteer in the Spanish Civil War, 1937–1939 and Divisional Commander of the First Proletarian Division of the Yugoslav Partisans. He is on occasion referred to as "the man who saved the Yugoslav Partisans", because it was he who anticipated the weakest point in the Axis lines on the Zelengora–Kalinovik axis, and devised the plan for breaking through it during the Battle of Sutjeska, thus saving Tito, his headquarters and the rest of the resistance movement. After the war, he served as the Chief of the General Staff of the Yugoslav People's Army, before moving to the position of Foreign Minister and spent the final years of his political career as the Vice President of Yugoslavia. Read more on Wikipedia

Since 2007, the English Wikipedia page of Koča Popović has received more than 100,212 page views. His biography is available in 15 different languages on Wikipedia making him the 5,229th most popular politician.

Among politicians, Koča Popović ranks 5,196 out of 14,801. Before him are Princess Olga of Greece and Denmark, Jovan Vladimir, Leopold Berchtold, Chintila, K. Kamaraj, and Apollonius Molon. After him are Giovanni Gronchi, Kōki Hirota, Pontiac, Prince Edward, Duke of Kent, D. F. Malan, and Tai Jia.