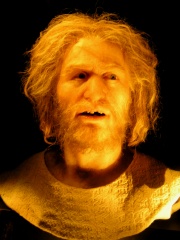 "Nikolaus" Storzenbecher or "Klaus" Störtebeker (1360 – supposed 20 October 1401) was reputed to be leader of a group of privateers known as the Victual Brothers (German: Vitalienbrüder). The Victual Brothers (Latin: victualia) were originally hired during a war between Denmark and Sweden to fight the Danish and supply the besieged Swedish capital Stockholm with provisions. After the end of the war, the Victual Brothers continued to capture merchant vessels for their own account and named themselves "Likedeelers" (literally: equal sharers). Read more on Wikipedia

Among people born in 1360, Klaus Störtebeker ranks 8. Before him are Andrei Rublev, Jan Žižka, Giovanni di Bicci de' Medici, Philippa of Lancaster, Ulrich von Jungingen, and Cennino Cennini. After him are Nuno Álvares Pereira, Amadeus VII, Count of Savoy, Joseph II of Constantinople, and Dorotea Bucca. Among people deceased in 1401, Klaus Störtebeker ranks 1. After him are Maria, Queen of Sicily, Dinis Dias, Vladislaus II of Opole, and Anabella Drummond.

Among SOCIAL ACTIVISTS In Germany