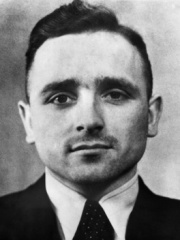 Nikolaus Barbie (25 October 1913 – 25 September 1991) was a German member of the Nazi Party, known as the "Butcher of Lyon" for having personally tortured prisoners of the Gestapo—primarily Jews and members of the French Resistance—while stationed in Lyon under the collaborationist Vichy regime. After the war, United States intelligence services, which employed him for his anti-Marxist efforts, aided his escape to Bolivia, where he advised the regime on how to repress opposition through torture.The West German Intelligence Service later recruited him. Barbie is suspected of having had a role in the Bolivian coup d'état orchestrated by Luis García Meza in 1980. Read more on Wikipedia

Klaus Barbie was a high-ranking Nazi officer who was responsible for the deaths of thousands of Jews and other people in France during World War II. He was known as the Butcher of Lyon and the Gestapo's "Butcher of Lyon."