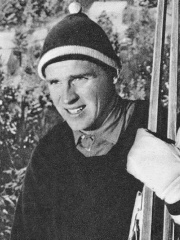 Klas Ivar Vilhelm Lestander (born 18 April 1931) is a Swedish former biathlete who won a gold medal at the 1960 Winter Olympics in Squaw Valley.Lestander started as a cross-country skier, but he was also an experienced hunter, and thus ended up with biathlon. At the 1960 Olympics he placed 15th out of 30 in skiing, but became the first international competitor to ever hit all 20 targets, and hence won the gold medal. His rival Aleksandr Privalov needed to clear three targets out of five at the last post to win the event, but managed only two, and ended up with a bronze medal. Read more on Wikipedia

Among ATHLETES In Sweden