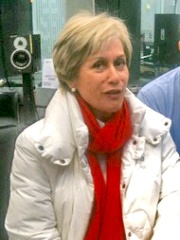 Dame Kiri Jeanette Claire Te Kanawa (; born Claire Mary Teresa Rawstron, 6 March 1944) is a New Zealand former opera singer. Her career included a full lyric soprano voice, which has been described as "mellow yet vibrant, warm, ample and unforced".Te Kanawa has received accolades in many countries, singing a wide array of works in many languages dating from the 17th to the 20th centuries. She is particularly associated with the works of Mozart, Strauss, Verdi, Handel and Puccini, and has found considerable success in portraying princesses, nobility, and other similar characters on stage.Though she rarely sang opera later in her career, Te Kanawa frequently performed in concert and recital, gave masterclasses, and supported young opera singers in launching their careers. Read more on Wikipedia

Since 2007, the English Wikipedia page of Kiri Te Kanawa has received more than 726,737 page views. Her biography is available in 33 different languages on Wikipedia making her the 248th most popular singer.

Among SINGERS In New Zealand