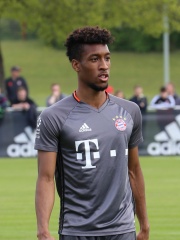 Kingsley Junior Coman (French pronunciation: ​[kiŋslɛ kɔman, -mɑ̃]; born 13 June 1996) is a French professional footballer who plays as a winger for German Bundesliga club Bayern Munich and the France national team. Trained at Paris Saint-Germain's academy, Coman moved to Juventus in 2014 on the expiration of his contract, winning the Serie A and Coppa Italia in his first season in Italy. In August 2015, he transferred on loan to Bayern Munich, winning another double in his first season. Read more on Wikipedia

Since 2007, the English Wikipedia page of Kingsley Coman has received more than 3,637,240 page views. His biography is available in 46 different languages on Wikipedia making him the 2,085th most popular soccer player.