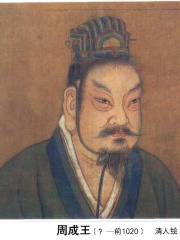 King Cheng of Zhou (Chinese: 周成王; pinyin: Zhōu Chéng Wáng; Wade–Giles: Chou Ch'eng Wang), personal name Ji Song (姬誦), was the second king of the Chinese Zhou Dynasty. The dates of his reign are 1042-1021 BCE or 1042/35-1006 BCE. His parents were King Wu of Zhou and Queen Yi Jiang (邑姜).King Cheng was young when he ascended the throne. His uncle, Duke of Zhou, fearing that Shang forces might rise again under the possible weak rule of a young ruler, became the regent and supervised government affairs for several years. Read more on Wikipedia

Since 2007, the English Wikipedia page of King Cheng of Zhou has received more than 66,482 page views. His biography is available in 20 different languages on Wikipedia making him the 3,811th most popular politician.

Page views of King Cheng of Zhous by language

Among politicians, King Cheng of Zhou ranks 3,788 out of 14,801. Before him are Adad-nirari II, Henri Christophe, Gnaeus Domitius Ahenobarbus, Constantin Fehrenbach, Adad-nirari I, and Ante Marković. After him are Humbert I, Count of Savoy, Quintus Caecilius Metellus Pius, Maria of Yugoslavia, Ajatashatru, Harpalus, and Karl Anton, Prince of Hohenzollern.