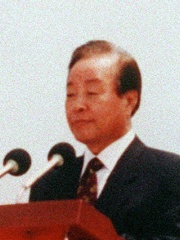 Kim Young-sam (Korean: 김영삼; Hanja: 金泳三; Korean pronunciation: [ki.mjʌŋ.sam] or [kim] [jʌŋ.sam]; 20 December 1927 – 22 November 2015) was a South Korean politician and activist who served as President of South Korea from 1993 to 1998. From 1961, he spent almost 30 years as one of the leaders of the South Korean opposition, and one of the most powerful rivals to the authoritarian regimes of Park Chung-hee and Chun Doo-hwan. Elected as president in 1992, Kim became the first civilian to hold the office in over 30 years. Read more on Wikipedia

Kim Young-sam was the president of South Korea from 1993 to 1998. He is most famous for his economic reforms that led to South Korea's rapid economic growth.

Among politicians, Kim Young-sam ranks 1,437 out of 15,710. Before him are Millard Fillmore, Jingtai Emperor, Olybrius, Kayqubad I, Philip of Swabia, and Kurt Schuschnigg. After him are Leo von Caprivi, Tsai Ing-wen, Alfonso VIII of Castile, James II of Aragon, Viktor Yushchenko, and Giuliano de' Medici, Duke of Nemours.