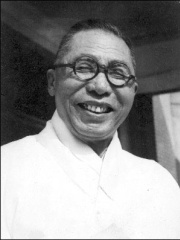 Kim Gu (Korean: 김구, Korean pronunciation: [kimɡu]; August 29, 1876 – June 26, 1949), also known by his pen name Baekbeom (백범; Korean pronunciation: [pɛkbʌm]), was a Korean statesman politician. He was the sixth, ninth and later the last President of the Provisional Government of the Republic of Korea, a leader of the Korean independence movement against the Empire of Japan, and a reunification activist after 1945. Read more on Wikipedia

Kim koo is most famous for being the founder of the Korean nationalist movement.

Among politicians, Kim Koo ranks 2,350 out of 15,710. Before him are Eudokia Makrembolitissa, Barbara of Portugal, Sergo Ordzhonikidze, Adad-nirari III, Abe no Seimei, and Gina Haspel. After him are Archduchess Maria Anna of Austria, Afonso VI of Portugal, Fumimaro Konoe, Mohammad Ali Shah Qajar, Benazir Bhutto, and Simone Veil.

Among POLITICIANS In North Korea