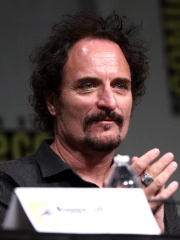 Kim F. Coates (born February 21, 1958) is a Canadian-American actor who has worked in both Canadian and American films and television series. He has worked on Broadway portraying Stanley Kowalski in A Streetcar Named Desire and in the lead role of Macbeth performed at the Stratford Shakespeare Festival. He is best known for his role as Alexander "Tig" Trager in the FX series Sons of Anarchy and as Declan Gardiner in the Citytv series Bad Blood, as well as his recurring roles in Prison Break, Cold Case, CSI and CSI: Miami. Read more on Wikipedia

Since 2007, the English Wikipedia page of Kim Coates has received more than 3,410,379 page views. His biography is available in 18 different languages on Wikipedia making him the 2,852nd most popular actor.