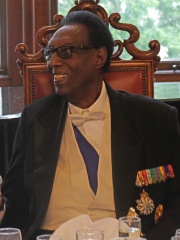 Kigeli V Ndahindurwa (born Jean-Baptiste Ndahindurwa; 29 June 1936 – 16 October 2016) was the last ruling King (Mwami) of Rwanda, from 28 July 1959 until the abolition of the Rwandan monarchy on 25 September 1961, shortly before the country acceded to independence from Belgium. After a brief period of moveabouts after leaving Rwanda, the titular King lived in exile during the final part of his life in the town of Oakton, Virginia, United States. In exile, he was known for heading the King Kigeli V Foundation, an organisation promoting humanitarian work for Rwandan refugees. Read more on Wikipedia

Since 2007, the English Wikipedia page of Kigeli V of Rwanda has received more than 239,734 page views. His biography is available in 18 different languages on Wikipedia making him the 11,300th most popular politician.

Page views of Kigeli V of Rwandas by language

Among politicians, Kigeli V of Rwanda ranks 11,235 out of 14,801. Before him are Michael Somare, Farahnaz Pahlavi, Ramon Dekkers, Hussa of Bernicia, Diogo Freitas do Amaral, and Sewadjkare Hori. After him are Gunnar Thoroddsen, Juan Crisóstomo Falcón, Anatoly Chubais, Lawrence Lambe, Włodzimierz Cimoszewicz, and Vjekoslav Bevanda.

Among POLITICIANS In Rwanda