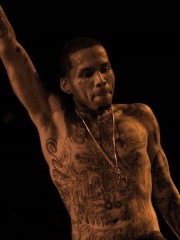 Brian Todd Collins (born April 1, 1986), known professionally as Kid Ink, is an American rapper, singer, songwriter, and record producer from Los Angeles. He released his debut independent album Up & Away in 2012, following an EP titled Almost Home, and his first major studio album My Own Lane in 2014. The latter spawned the singles "Show Me" (featuring Chris Brown), "Iz U Down" (featuring Tyga), and "Main Chick" (featuring Chris Brown). Read more on Wikipedia

Among singers, Kid Ink ranks 3,671 out of 3,528. Before him are Joe Budden, Kimberley Walsh, Daya, Gabrielle Aplin, Stevan Faddy, and Bun B. After him are Foxes, Bizzy Bone, Alexey Zhigalkovich, Ashnikko, Alexander Ivanov, and Mira Aroyo.