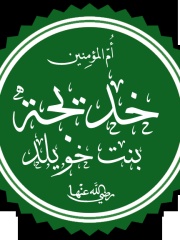 Khadijah bint Khuwaylid (Arabic: خَدِيجَة ٱبْنَت خُوَيْلِد‎, Khadījah ibnat Khuwaylid, born 555 CE – 22 November 619 CE), commonly known as Khadija, was the first wife and first female follower of the Islamic prophet Muhammad. Khadijah was the daughter of Khuwaylid ibn Asad, a leader of Quraysh tribe in Mecca, and a successful businesswoman in her own right. Khadijah is often referred to by Muslims as "Mother of the Believers". Read more on Wikipedia

Since 2007, the English Wikipedia page of Khadija bint Khuwaylid has received more than 1,570,389 page views. Her biography is available in 69 different languages on Wikipedia making her the 16th most popular companion.

Among COMPANIONS, Khadija bint Khuwaylid ranks 16 out of 586. Before her are Madame de Pompadour, Nefertari, Jacqueline Kennedy Onassis, Marie Louise, Duchess of Parma, Mihrimah Sultan, and Eleanor of Aquitaine. After her are Catherine of Aragon, Nurbanu Sultan, Roxana, Lucretia, Ankhesenamun, and Olympias.

Most Popular COMPANIONS in Wikipedia