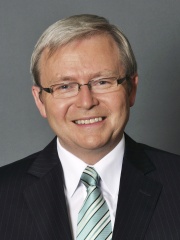 Kevin Michael Rudd (born 21 September 1957) is an Australian former politician who was the 26th Prime Minister of Australia, serving from December 2007 to June 2010 and again from June to September 2013. He held office as the leader of the Australian Labor Party. Rudd was born in Nambour, Queensland. Read more on Wikipedia

Since 2007, the English Wikipedia page of Kevin Rudd has received more than 1,561,008 page views. His biography is available in 79 different languages on Wikipedia making him the 10,191st most popular politician.

Among politicians, Kevin Rudd ranks 10,140 out of 14,801. Before him are Edward Hyde, 1st Earl of Clarendon, Roger Williams, Jamshid bin Abdullah of Zanzibar, Şemsettin Günaltay, Tribhuvan of Nepal, and Pacorus I. After him are Alexander von Benckendorff, Margaret Taylor, Pál Losonczi, Walter Hauser, Casimir Pierre Périer, and José María Vargas.