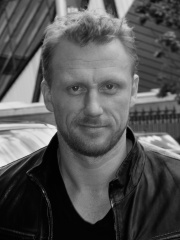 Kevin McKidd (born 9 August 1973) is a British actor, television director, and occasional singer. Before playing the role of Owen Hunt in Grey's Anatomy, for which he is widely known, McKidd starred as Dan Vasser in the NBC series Journeyman (2007), Tommy Mackenzie in Danny Boyle's Trainspotting (1996), Count Vronsky in the BBC miniseries Anna Karenina (2000), and Lucius Vorenus in the historical drama series Rome (2005–2007). He provided the voice of John "Soap" MacTavish in the video games Call of Duty: Modern Warfare 2 and Call of Duty: Modern Warfare 3. Read more on Wikipedia

Since 2007, the English Wikipedia page of Kevin McKidd has received more than 3,998,880 page views. His biography is available in 28 different languages on Wikipedia making him the 3,162nd most popular actor.