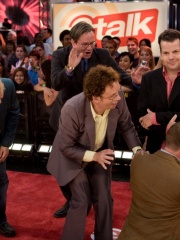 Kevin Hamilton McDonald (born May 16, 1961) is a Canadian actor, voice actor and comedian. He is a member of the comedy troupe The Kids in the Hall, who have appeared together in a number of stage, television and film productions, most notably the 1988–1995 TV series The Kids in the Hall. He played Pastor Dave in That '70s Show, and also starred as a co-pilot in the 2011 web comedy series Papillon. Read more on Wikipedia

Among people born in 1961, Kevin McDonald ranks 627. Before him are Kerry Dixon, Suhasini Maniratnam, Kip Winger, Steve McMahon, Clive Allen, and Will Self. After him are Thurl Bailey, Judi Brown Clarke, Charlie Nicholas, David Kaufman, Brian McDermott, and Daniel O'Donnell.