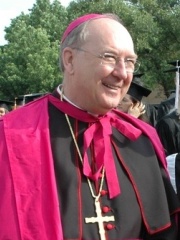 Kevin Joseph Farrell, KGCHS (born September 2, 1947) is an Irish-American prelate of the Catholic Church. He is a former member of the Legion of Christ, and served as the seventh bishop of the Diocese of Dallas, as well as the chancellor of the University of Dallas. On September 1, 2016, Farrell was appointed the prefect of the Dicastery for the Laity, Family and Life. Read more on Wikipedia

Among religious figures, Kevin Farrell ranks 1,203 out of 2,272. Before her are Carpocrates, Victor Maurus, Alexander Schmorell, Beniamino Stella, Jeremias II of Constantinople, and Antipope Theodoric. After her are Pietro Gasparri, Shinran, Alfred Loisy, John IV of Constantinople, Oswald of Northumbria, and Shenoute.