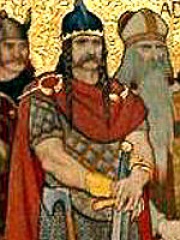 Kenneth MacAlpin (Medieval Gaelic: Cináed mac Ailpin, Modern Scottish Gaelic: Coinneach mac Ailpein; 810 – 13 February 858), known in most modern regnal lists as Kenneth I, was a king of the Picts who, according to national myth, was the first king of Scots. He was thus later known by the posthumous nickname of An Ferbasach, "The Conqueror". Read more on Wikipedia

Kenneth MacAlpin is most famous for being the first king of Scotland.

Among politicians, Kenneth MacAlpin ranks 2,426 out of 15,710. Before him are Klaus Iohannis, Sirikit, George William, Elector of Brandenburg, Emperor Nakamikado, Jacques Pierre Brissot, and John George I, Elector of Saxony. After him are Risto Ryti, Khieu Samphan, Emperor Ling of Han, Herod Agrippa II, Sahure, and Marinus van der Lubbe.

Among people born in 810, Kenneth MacAlpin ranks 6. Before him are Muhammad al-Bukhari, Pope Benedict III, John Scotus Eriugena, Abbas ibn Firnas, and Halfdan the Black. After him are Ahmad ibn Muhammad ibn Kathir al-Farghani, Hastein, Kassia, Emperor Xuanzong of Tang, García Íñiguez of Pamplona, and Eulogius of Córdoba. Among people deceased in 858, Kenneth MacAlpin ranks 3. Before him are Pope Benedict III and Æthelwulf, King of Wessex. After him are Emperor Montoku, Li Shangyin, and Sedulius Scottus.