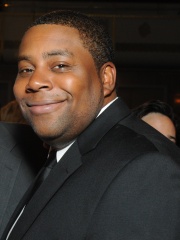 Kenan Thompson (; born May 10, 1978) is an American actor and comedian. He has been a cast member of the NBC sketch comedy series Saturday Night Live since 2003, making him the longest-tenured cast member in the show's history.Thompson began his acting career in the early 1990s, and earned fame as an original cast member of Nickelodeon's sketch comedy series All That. In this time, he often collaborated with All That costar Kel Mitchell. Read more on Wikipedia

Since 2007, the English Wikipedia page of Kenan Thompson has received more than 5,471,848 page views. His biography is available in 21 different languages on Wikipedia making him the 7,973rd most popular comedian.

Among comedians, Kenan Thompson ranks 87 out of 8. Before him are Bill Burr, B. J. Novak, Aziz Ansari, Chelsea Handler, Nick Kroll, and Mitch Hedberg. After him are Ralphie May, Carrie Brownstein, and Bo Burnham.