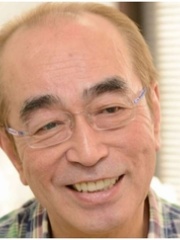 Ken Shimura (志村 けん, Shimura Ken) (born Yasunori Shimura (志村 康徳, Shimura Yasunori), 20 February 1950 – 29 March 2020) was a Japanese comedian. He co-starred with Masashi Tashiro, Nobuyoshi Kuwano in the Japanese variety show Shimura Ken no Bakatono-sama.Throughout his comedy career, Shimura was known for his "Bakatono-sama" character, which was unusual among Japanese comedians, in that he could satirize the deeds of powerful figures (a company president, a politician, a family head, a school principal, the head of a Japanese yakuza gang) under the garb of a foolish king who lived in the country a long time ago. Another popular shtick of Shimura in the same show was "Henna Oji-san" [weirdo] who entertained himself in the company of nubile girls. Read more on Wikipedia

Ken Shimura is most famous for his work on the manga series "Urusei Yatsura" which ran from 1978 to 1987.