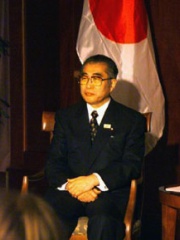 Keizō Obuchi (小渕 恵三, Obuchi Keizō, 25 June 1937 – 14 May 2000) was a Japanese politician who served as Prime Minister of Japan from 1998 to 2000. Obuchi was elected to the House of Representatives in Gunma Prefecture in 1963, becoming the youngest legislator in Japanese history, and was re-elected to his seat eleven times. Obuchi rose through the ranks of the Liberal Democratic Party and distinguished himself in the prominent posts of Chief Cabinet Secretary and Minister for Foreign Affairs in the 1980s and 1990s. Read more on Wikipedia

Among politicians, Keizō Obuchi ranks 5,267 out of 15,710. Before him are John Dudley, 1st Duke of Northumberland, Emílio Garrastazu Médici, Louis II, Elector of Brandenburg, Princess Wencheng, Fouad Siniora, and Maria Anna Sophia of Saxony. After him are Prince August of Saxe-Coburg and Gotha, Ivan Sratsimir of Bulgaria, George III of Georgia, Phraates II, Leo Tindemans, and Frederick IV, Elector Palatine.