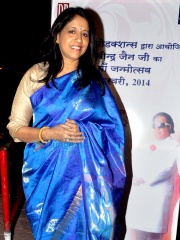 Sharada (born 25 January 1958), known as Kavita Krishnamurthy or Kavita Subramaniam, is an Indian playback and classical singer. She has recorded more than 50,000 songs in 36 And Many More languages including Bengali, Kannada, Hindi, Bhojpuri, Telugu, Odia, Marathi, English, Urdu, Tamil, Malayalam, Gujarati, Nepali, Assamese, Konkani and other languages. She is the recipient of four Filmfare Best Female Playback Singer Awards (winning consecutively during 1995–1997), and the Padmashri which she received in 2005. In 1999, she married noted violinist L. Read more on Wikipedia

Among singers, Kavita Krishnamurthy ranks 2,242 out of 3,541. Before her are Elitsa Todorova, Nico, Nadia Ali, Barbara Dex, GZA, and Gary Lux. After her are Kat DeLuna, Patrick Ouchène, Jake Zyrus, Lee Greenwood, Mino, and Ella Henderson.