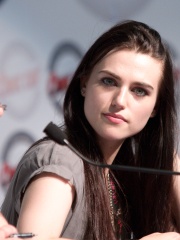 Katie McGrath () is an Irish actress. In television, she is best known for portraying Morgana on the BBC One series Merlin (2008–2012), Lucy Westenra on the British-American series Dracula (2013–2014), Sarah Bennett in the first season of the Canadian horror anthology series Slasher (2016) and for her role as Lena Luthor on the American superhero series Supergirl (2016–present). Her film roles include Lady Thelma Furness in the drama film W.E. Read more on Wikipedia

Since 2007, the English Wikipedia page of Katie McGrath has received more than 4,679,454 page views. Her biography is available in 33 different languages on Wikipedia making her the 342nd most popular actor.