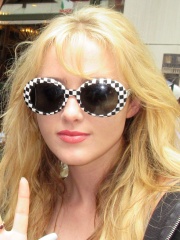 Kathryn Love Newton (born February 8, 1997) is an American actress, best known for her role as Allie Pressman in the Netflix TV series The Society, Abigail Carlson in Big Little Lies and Louise Brooks in the CBS television series Gary Unmarried. Newton also stars in the 2012 film Paranormal Activity 4 as Alex Nelson, which earned her the 2013 Young Artist Award for Best Leading Young Actress in a Feature Film and the 2019 film Pokémon Detective Pikachu as Lucy Stevens, alongside Ryan Reynolds and Justice Smith. Read more on Wikipedia

Since 2007, the English Wikipedia page of Kathryn Newton has received more than 3,612,808 page views. Her biography is available in 23 different languages on Wikipedia making her the 7,006th most popular actor.