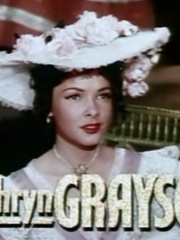 Zelma Kathryn Elisabeth Hedrick (February 9, 1922 – February 17, 2010) was an American actress and coloratura soprano.From the age of twelve, Grayson trained as an opera singer. She was under contract to Metro-Goldwyn-Mayer by the early 1940s, soon establishing a career principally through her work in musicals. After several supporting roles, she was a lead performer in such films as Thousands Cheer (1943), Anchors Aweigh (1945) with Frank Sinatra and Gene Kelly, and Show Boat (1951) and Kiss Me Kate (1953), both with Howard Keel.When film musical production declined, she worked in theatre, appearing in Camelot (1962–1964). Read more on Wikipedia

Since 2007, the English Wikipedia page of Kathryn Grayson has received more than 828,866 page views. Her biography is available in 24 different languages on Wikipedia making her the 4,324th most popular actor.