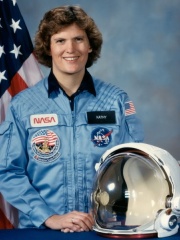 Kathryn Dwyer Sullivan (born October 3, 1951) is an American geologist and a former NASA astronaut. A crew member on three Space Shuttle missions, she was the first American woman to walk in space on October 11, 1984. On June 7, 2020, she became the first woman to dive to the Challenger Deep in the Mariana Trench, the deepest part of the Earth's oceans. She was Under Secretary of Commerce for Oceans and Atmosphere and Administrator of the National Oceanic and Atmospheric Administration after being confirmed by the U.S. Read more on Wikipedia

Since 2007, the English Wikipedia page of Kathryn D. Sullivan has received more than 252,829 page views. Her biography is available in 30 different languages on Wikipedia making her the 232nd most popular astronaut.