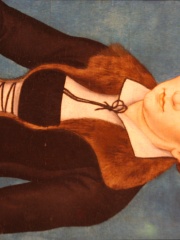 Katharina von Bora (German: [kataˈʁiːnaː fɔn ˈboːʁaː]; 29 January 1499 – 20 December 1552), after her wedding Katharina Luther, also referred to as "die Lutherin" ("the Lutheress"), was the wife of Martin Luther, German reformer and a seminal figure of the Protestant Reformation. Beyond what is found in the writings of Luther and some of his contemporaries, little is known about her. Read more on Wikipedia

Katharina von Bora was a German nun and wife of Martin Luther. She was born in 1499 and died in 1552. She was most famous for her marriage to Martin Luther and for being the first woman to translate the Bible into German.

Among companions, Katharina von Bora ranks 96 out of 673. Before her are Josephine of Leuchtenberg, Catherine of Austria, Queen of Portugal, Maria Feodorovna, Brigitte Macron, Isabella of Austria, and Malhun Hatun. After her are Louise of Mecklenburg-Strelitz, Isabeau of Bavaria, Athaliah, Maria Luisa of Parma, Anna Pavlovna of Russia, and Caterina Sforza.