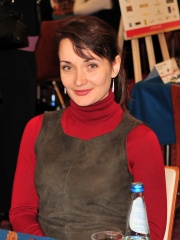 Ekaterina Aleksandrovna Lagno (Russian: Екатерина Александровна Лагно; born 27 December 1989) is a Russian (formerly Ukrainian) chess grandmaster. A chess prodigy, she earned the title Woman Grandmaster (WGM) at the age of 12 years, four months and two days. In 2007, she was awarded the grandmaster title.She is a twice European Women's Champion and won two team gold medals at the Women's Chess Olympiad, in 2006 and 2014, playing for Ukraine and Russia respectively. Read more on Wikipedia

Since 2007, the English Wikipedia page of Kateryna Lagno has received more than 105,016 page views. Her biography is available in 23 different languages on Wikipedia making her the 200th most popular chess player.

Among CHESS PLAYERS In Ukraine