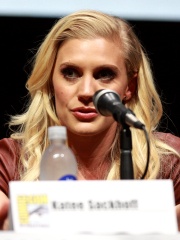 Kathryn Ann Sackhoff (born April 8, 1980) is an American actress known for playing Lieutenant Kara "Starbuck" Thrace on the Sci Fi Channel's television program Battlestar Galactica (2004–2009), Niko Breckenridge on the Netflix series Another Life, Victoria "Vic" Moretti on the Netflix series Longmire, Bo-Katan Kryze on the Disney+ series The Mandalorian as well as providing the voice for the character in Star Wars: The Clone Wars (2012-2020) and Star Wars Rebels (2017), and the voice of Bitch Pudding on Robot Chicken (2005–present), as well as several other characters throughout her career. She was nominated for four Saturn Awards for her work on Battlestar Galactica and won the award for Best Supporting Actress on Television in 2005. Sackhoff also starred in the short-lived TV series The Fearing Mind (2000–2001) and The Education of Max Bickford (2001–2002); had recurring roles in the TV series Bionic Woman (2007), Nip/Tuck (2009), and CSI: Crime Scene Investigation (2010–2011); and had a lead role in the eighth season of 24 as Dana Walsh (2010). Read more on Wikipedia