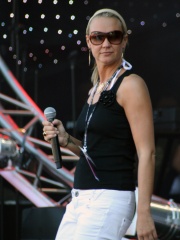 Kate Ryan (born Katrien Verbeeck; 22 July 1980) is a Belgian singer and songwriter, and the winner of a World Music Award. She began her singing career in 2001 and later found fame with a string of dance hits. These included covers, mostly of Mylène Farmer and France Gall, such as "Désenchantée", "Libertine", and "Ella, elle l'a", and Desireless' "Voyage Voyage", as well as new material. Read more on Wikipedia

Since 2007, the English Wikipedia page of Kate Ryan has received more than 268,616 page views. Her biography is available in 43 different languages on Wikipedia making her the 766th most popular singer.

Among singers, Kate Ryan ranks 769 out of 3,001. Before her are Jon Vickers, Maryla Rodowicz, Inna, Dead, Max Raabe, and Massimo Ranieri. After her are Adam Lambert, Dave Benton, Sandra Kim, Mississippi John Hurt, G-Dragon, and Renaud.