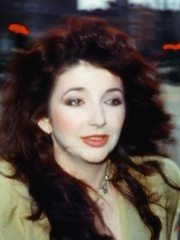 Catherine Bush (born 30 July 1958) is an English singer, songwriter, record producer and dancer. In 1978, at the age of 19, she topped the UK Singles Chart for four weeks with her debut single "Wuthering Heights", becoming the first female artist to achieve a UK number one with a self-written song. Bush has since released 25 UK Top 40 singles, including the Top 10 hits "The Man with the Child in His Eyes", "Babooshka", "Running Up That Hill", "Don't Give Up" (a duet with Peter Gabriel) and "King of the Mountain". Read more on Wikipedia

Kate Bush is a British singer-songwriter and musician. She is most famous for her song "Wuthering Heights" which was released in 1978.

Among singers, Kate Bush ranks 71 out of 3,528. Before her are Víctor Jara, The Notorious B.I.G., Ian Gillan, Klaus Meine, Diana Ross, and Johnny Hallyday. After her are Marianne Faithfull, Karel Gott, Glen Campbell, Prince, Bonnie Tyler, and Florence Foster Jenkins.