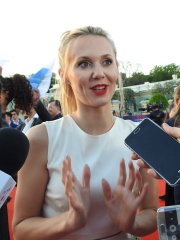 Katarzyna "Kasia" Moś (Polish pronunciation: [kataˈʐɨna ˈkaɕa ˈmɔɕ]; born 3 March 1987) is a Polish singer, songwriter, and dancer. She was previously a member of The Pussycat Dolls Burlesque Revue in 2011, and in 2012, she came third in the third series of the Polish version of Must Be the Music. Read more on Wikipedia

Since 2007, the English Wikipedia page of Kasia Moś has received more than 91,321 page views. Her biography is available in 23 different languages on Wikipedia making her the 2,720th most popular singer.

Among singers, Kasia Moś ranks 2,735 out of 3,001. Before her are Kehlani, Iyaz, Anjeza Shahini, Ace Wilder, Markéta Irglová, and Mase. After her are Tyler Hilton, Asami Konno, Luiz Ejlli, Ilinca Băcilă, Polina Smolova, and Christophe Willem.