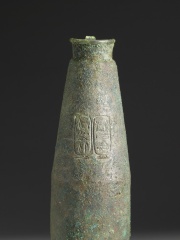 Kashta was an 8th century BC king of the Kushite Dynasty in ancient Nubia and the successor of Alara. His nomen k3š-t3 (transcribed as Kashta, possibly pronounced /kuʔʃi-taʔ/) "of the land of Kush" is often translated directly as "The Kushite". Read more on Wikipedia

Since 2007, the English Wikipedia page of Kashta has received more than 97,061 page views. His biography is available in 19 different languages on Wikipedia making him the 8,109th most popular politician.

Page views of Kashtas by language

Others Deceased in 745 BC