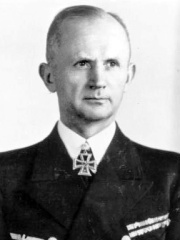 Karl Dönitz (sometimes spelled Doenitz; German: [ˈdøːnɪts] (listen); 16 September 1891 – 24 December 1980) was a German admiral during the Nazi era who briefly succeeded Adolf Hitler as the German head of state in 1945. As Supreme Commander of the Navy since 1943, he played a major role in the naval history of World War II. The Nuremberg Trials court convicted him of war crimes in 1946.He began his career in the Imperial German Navy before World War I. In 1918, he was commanding UB-68 when she was sunk by British forces. Dönitz was taken prisoner. Read more on Wikipedia

Since 2007, the English Wikipedia page of Karl Dönitz has received more than 4,132,500 page views. His biography is available in 67 different languages on Wikipedia making him the 41st most popular military personnel.