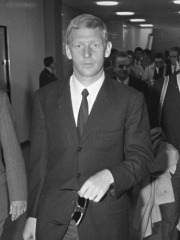 Karl-Heinz Schnellinger (born 31 March 1939) is a German former footballer who played as a defender. He was born in Düren (then in Rhine Province, Prussia, today North Rhine-Westphalia). An athletic and hard-tackling player, with a strong physique, he was nicknamed the "Volkswagen" for his continuity of performance, both in quantity and in quality, and for his versatility; indeed, although he was usually deployed as a full-back, he was capable of playing anywhere along the back, and could also play as a centre-back, as a sweeper, or even as a defensive midfielder. Read more on Wikipedia

Karl-Heinz Schnellinger is most famous for being a German footballer who played as a defender and midfielder. He played for Bayern Munich, Borussia Mönchengladbach, and the German national team. He is the only player to have won the European Championship with three different teams.