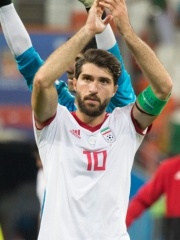 Karim Ansarifard (Persian: کریم انصاری‌فرد‎; born 3 April 1990) is an Iranian footballer who plays as a forward for Al-Sailiya and the Iranian national team. His playing style and ability have drawn comparisons to Ali Daei (the coach who scouted him) and he has been named Daei's "successor".World Soccer selected Ansarifard as one of the best young talents in the world alongside Javier Hernández and Jack Wilshere. In January 2012, FIFA.com selected him as one of the players to watch in 2012. Read more on Wikipedia

Since 2007, the English Wikipedia page of Karim Ansarifard has received more than 497,473 page views. His biography is available in 35 different languages on Wikipedia making him the 5,341st most popular soccer player.