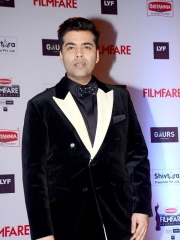 Karan Kumar Johar (born Rahul Kumar Johar, 25 May 1972), often informally referred to as KJo, is an Indian film director, producer, screenwriter, costume designer, actor and television personality who works in Hindi films. He is the son of Hiroo Johar and the producer Yash Johar. Johar made his directorial debut with the romantic comedy-drama Kuch Kuch Hota Hai (1998), which earned him the Filmfare Award for Best Director and the Filmfare Award for Best Screenplay. Read more on Wikipedia

Since 2007, the English Wikipedia page of Karan Johar has received more than 8,958,091 page views. His biography is available in 33 different languages on Wikipedia making him the 1,203rd most popular film director.