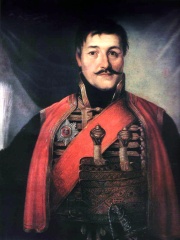 Đorđe Petrović (Serbian Cyrillic: Ђорђе Петровић, pronounced [d͡ʑôːrd͡ʑe pětroʋit͡ɕ]), better known by the sobriquet Black George, or Karađorđe (Serbian Cyrillic: Карађорђе, pronounced [kârad͡ʑoːrd͡ʑe]; 16 November [O.S. 3 November] 1768 – 26 July [O.S. 14 July] 1817), was a Serbian revolutionary who led the struggle for his country's independence from the Ottoman Empire during the First Serbian Uprising of 1804–1813. Born into an impoverished family in the Šumadija region of Ottoman Serbia, Karađorđe distinguished himself during the Austro-Turkish War of 1788–1791 as a member of the Serbian Free Corps, a militia of Habsburg and Ottoman Serbs, armed and trained by the Austrians. Fearing retribution following the Austrians' and Serb rebels' defeat in 1791, he and his family fled to the Austrian Empire, where they lived until 1794, when a general amnesty was declared. Read more on Wikipedia

Karađorđe is most famous for leading the Serbian Revolution against the Ottoman Empire.

Page views of Karađorđes by language

Among politicians, Karađorđe ranks 1,614 out of 15,710. Before him are Louise Mountbatten, Soong Mei-ling, Leonid Kuchma, Ricimer, Cao Rui, and Sasaki Kojirō. After him are Kamehameha I, Charles-Henri Sanson, Teodoro Obiang Nguema Mbasogo, Li Zicheng, Hassanal Bolkiah, and Albert II, Duke of Austria.