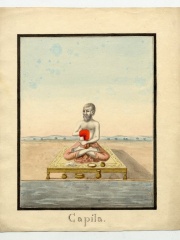 Kapila (Sanskrit: कपिल) is a given name of different individuals in ancient and medieval Indian texts, of which the most well known is a person mentioned in Vedic texts and traditionally regarded as the founder of the Samkhya school of Hindu philosophy. Kapila of Samkhya fame is considered a Vedic sage, estimated to have lived in the 6th-century BCE, or the 7th-century BCE.Rishi Kapila is credited with authoring the influential Samkhya-sutra, in which aphoristic sutras present the dualistic philosophy of Samkhya. Read more on Wikipedia

Page views of Kapilas by language

Among philosophers, Kapila ranks 471 out of 1,089. Before him are Plutarch of Athens, Stein Rokkan, Arne Næss, Guillaume Budé, Karl-Otto Apel, and Emmanuel Mounier. After him are Alasdair MacIntyre, Kenneth Waltz, Abul A'la Maududi, Émile Chartier, Hans Reichenbach, and Gianni Vattimo.

Among people born in 550 BC, Kapila ranks 11. Before him are Aristides, Ephialtes of Trachis, Mahākāśyapa, Haggai, Atossa, and Goujian. After him are Fuchai, Labashi-Marduk, Ariston of Sparta, Arsames, Himilco, and Histiaeus.