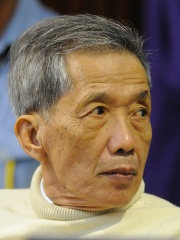 Kang Kek Iew or Kaing Kek Iev, also romanized as Kaing Guek Eav (Khmer: កាំង ហ្គេកអ៊ាវ), nom de guerre Comrade Duch or Deuch (មិត្តឌុច); or Hang Pin, (born 17 November 1942) is a Cambodian war criminal and former leader in the Khmer Rouge movement, which ruled Democratic Kampuchea from 1975 to 1979. As the head of the government's internal security branch (Santebal), he oversaw the Tuol Sleng (S-21) prison camp where thousands were held for interrogation and torture, after which the vast majority of these prisoners were eventually executed. He was the first Khmer Rouge leader to be tried by the Extraordinary Chambers in the Courts of Cambodia for the crimes of the Khmer Rouge regime, and was convicted of crimes against humanity, murder, and torture for his role during the Khmer Rouge rule of Cambodia and sentenced to 30 years' imprisonment. Read more on Wikipedia

Since 2007, the English Wikipedia page of Kang Kek Iew has received more than 258,471 page views. His biography is available in 26 different languages on Wikipedia making him the 65th most popular extremist.

Among EXTREMISTS In Cambodia